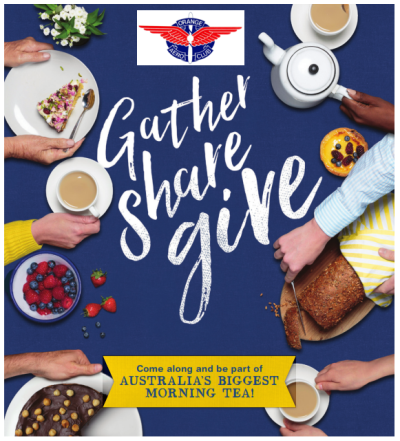 The Club's hosting on 15th June of Australia's Biggest Morning Tea Fly-In was an outstanding success!

The coordinator, Stuart Porges, was ecstatic at the success of the day, which saw an estimated 200 people visit the club for the cause, and eight aircraft flying in for the event despite heavy fog virtually closing the airport till around 9 am.

Stuart thanked to all those who assisted in the organisation and conduct of the event, in particular to Denise Wilson and Margaret Kingham and the ladies of the Forest Reefs Uniting Church Women's Fellowship, who provided cakes and other food for the cause. Thanks also to Jan Pullen for her work on the day and in soliciting donations for the raffle, and flying instructors Paul, Troy, Bryan and Catherine for the donation of flights for a blind raffle.

Aircraft flying included one each from Toowoomba, Sydney, Cessnock and three from Cowra, including David Shaw in his Gere Sport biplane, built by himself and his late father Richard.

Around $2300 was raised, from direct contributions and the proceeds of raffles. As well as the monetary benefit to the Cancer Council, events such as this help raise the awareness of the prevalence and effects of cancer, and the great work being done by the Cancer Council.