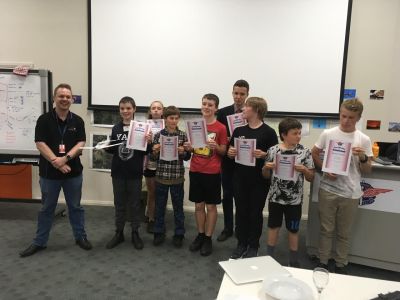 Building on the success of last year's program, Orange Flight Training's CFI Bryan Clements ran the course again in 2018. This was a smaller group of students - eight in all, and it also ran later in the year, which had outdoor activities running in daylight!

The aim of the course was to foster and encourage young people with an interest in some aspect of aviation, by providing them with a basic overview of some aviation topics. These included:

The group also had a behind the scenes look into the operation of the Terminal, courtesy of Luke Kelly, took a Trial Instructional Flight in a Jabiru 160 aircraft, and had some fun with some outdoor navigation exercises.

The photos below show some of trainees in a selection of the activities.